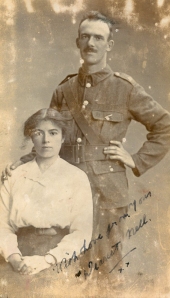 Here at the Museum of Carpet, we’re very keen to reveal the contributions made by local men and women to the First World War effort. So when we put the call out for local people to loan objects for the exhibition many came forward including Andra  Kleanthous, a Life Member of the Friends of the Museum of Carpet, who wanted to make sure that her grandfather’s story was featured. Her grandfather, Lewis Clifford Bratt, was born in Baxter Street, Kidderminster and he joined the Royal Engineers in 1915.  As part of the exhibition, Andra was keen that her grandfather’s pocket book was put on display which details his travels whilst with the Royal Engineers. His badges and medals are also on display alongside this notebook. Louis was a talented draftsman, and had ambitions of becoming a carpenter prior to the outbreak of war. Two of his sketchbooks are currently on display at the Museum of Carpet as part of the exhibition, which show Lewis’ intricate drawings of architectural features he saw on his journey through France.  Also on display are carvings made by Lewis from chalk blocks taken from the trenches at the battle of Loos in 1916. Lewis was involved in battle at both Ypres and the Somme, and was invalided with shell shock in 1916. He spent over a year recovering at a military hospital in the UK. Once he left the Front, he never went back, instead returning to Kidderminster to live with his wife, Nell. A final poignant item on display at the Museum is this photograph of Lewis with Nell to whom he proposed in a love letter written whilst out in the trenches. As Andra says, ‘My grandfather was one of the many hundreds of Kidderminster men prepared to do their bit for King and country. I am extremely proud of him for that. I treasure his notebooks as they show what a talented man he was but they are also a small piece of beauty from what would have been a dreadful conflict.’