Kidderminster’s Museum of Carpet is celebrating after being visited by the celebrity fashion designer, Wayne Hemingway as part of BBC 2’s Celebrity Antiques Roadshow which was broadcast on 11 January at 7.00pm.

Wayne founded the fashion label, Red or Dead, in the 1980’s with his wife, Geraldine, as a way to bring designer fashion to the reach of everyone, and the range went on to be sold in places such as Top Shop and Miss Selfridge. Today the team work a range of companies such as John Lewis, a business that shares their commitment to design and social fairness.

Wayne was keen to visit the Museum of Carpet when he found out that it holds about 50 collection samples and items associated with one of his design icons, Lucienne Day. Lucienne worked as a carpet designer at Tomkinson’s Ltd in the 1960’s and is credited with creating some of the most popular designs. Theirs was a partnership underpinned by a shared passion for being creative and a love of design as a force of good.

Lucienne and Robin Day met at the college dance at The Royal College of Art and in 1940 got married. The design duo then spent the next 67 years together building up an acclaimed body of work that will remain forever iconic. Whilst Lucienne designed carpets, fabrics and curtains, Robin will best be remembered for the polypropylene stacking chair. This was considered revolutionary at the time and appeared in every village hall, school or waiting room. As a product, the chair, usually in bright orange, fulfilled his stated aim for great design to be affordable and available to all.

As Museum Manager, Caroline Taylor, said, “This visit really helps put the Museum of Carpet on the design trail as Wayne is a major force in fashion, interiors and architecture today. He’s got a real interest and passion for good quality design that is functional, yet attractive to the eye and many of our carpets fit into that description. We hope that by having such a big figure in contemporary design on board, we could really show the value of our collections to people seeking artistic inspiration or just wanting to see good, clean patterns.’ 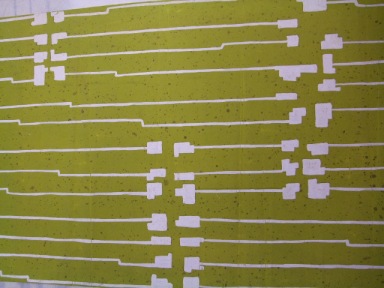 The programme follows two celebrities as they trail around an area visiting local antique shops and auctions purchasing antiques that they then sell at auction for profit. Wayne was accompanied by local antiques expert, Philip Serrell, who based in Malvern is a good friend to the Museum. Philip has offered his professional opinion on items donated to the Museum in the past.

Melvyn Thompson, local historian and keen Museum volunteer explained to both men the history of the town and the heritage of carpet making. He explained how ‘stuff’ – a patterned heavy cloth – laid the seeds for the carpet trade which became a world-leading industry as Kidderminster carpets were laid in palaces and stately homes across the globe, including the Houses of Parliament and the White House.

As the centenary of Lucienne’s birth is coming up in 2017 the Museum is hoping that Wayne will co-curate an exhibition on the impact of the couple on design in the 1950’s and 1960’s, a heyday time for the carpet industry when approx. 15,000 local people were employed in the trade.